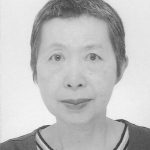 Collaborated with Masami Suzuki in the exhibitions of Kenji Funami on 2010, of Setsuko Nakagawa on 2015.